Dapagliflozin and cardiovascular events in type 2 diabetes : the model of the DECLARE-TIMI 58 trial

This paper aimed to review the clinical data on dapagliflozin (Forxiga®) treatment in the light of the recent DECLARE-TIMI 58 trial results. This study involving Type 2 diabetic patients, either with or without prior macroangiopathy, has demonstrated cardiovascular benefits in terms of the primary efficacy outcome, namely a composite of cardiovascular death and hospitalization for heart failure. Moreover, the study has revealed a lower risk for renal disease progression.

What does this article bring up for us?

The EMPA-REG OUTCOME and CANVAS trials have both evidenced cardiovascular benefits in Type 2 diabetic patients, with established CV disease in the majority of them. The DECLARE-TIMI 58 was a trial including a broader patient population with about 60% of them in primary cardiovascular prevention. Therefore, this study adds significant clinical information, in addition to the two previous randomized trials with SGLT-2 inhibitors, essentially demonstrating a lower risk for heart failure-induced hospitalizations in patients undergoing dapagliflozin vs. placebo therapy.

Type 2 diabetes is associated with an increased risk of vascular complications, in particular macroangiopathy, which is the leading cause of mortality following coronary ischemic disease, stroke or other pathological conditions, including heart failure (1-3). As reported recently by Fitchett et al., heart failure has now emerged as a severe complication in diabetic subjects due to atherosclerotic and/or microvascular myocardial changes (4). Several reports confirmed that survival was lower in diabetic patients in the presence of heart failure: 40% of individuals diagnosed with both diabetes and heart insufficiency will die within the three years vs. only 4% of those diagnosed with diabetes alone (4). Conversely, patients with chronic heart failure who developed type 2 diabetes had also a poorer prognosis in terms of overall mortality, as reported by MacDonald et al. (5).

In this context, antihyperglycemic agents with a collateral “cardio protective” effect in terms of major adverse cardiovascular (CV) events (MACE) and/or heart failure are therefore potentially of main clinical interest in the treatment of type 2 diabetes, as also recently mentioned in the ADA-EASD recommendations (6,7).

SGLT-2 inhibitors are glucoretic agents characterized by a high antihyperglycemic efficacy in the setting of normal renal function (8,9). Moreover, as demonstrated in the EMPA-REG OUTCOME (10) and CANVAS (11) studies, in type 2 diabetic patients who had (in majority) established CV disease, they are associated with a significant reduction in CV events, in particular in the hospitalization rate for heart failure (approximatively -40% vs. placebo) (10,11). Observational data, especially in the CVD- Real study, are in phase with the results of these two important randomized trials published in the New England Journal of Medicine (10-13).

Dapagliflozin (Forxiga®) is a selective inhibitor of glucose cotransporter 2 that blocks glucose resorption in the proximal tubule of the kidney, promoting thereby glycosuria, weight loss and reduction in blood pressure levels (9).

The aim of this paper is to propose a state of the art concerning dapagliflozin in the context of the recently published DECLARE-TIMI 58 Trial (for Dapagliflozin in cardiovascular Events-Thrombolysis In Myocardial Infarction 58) (14).

Subjects with type 2 diabetes, aged 40 years or older, who had or were at risk for atherosclerotic CV disease, were randomly assigned to receive, in addition to their usual antihyperglycemic therapy (which was at the discretion of their treating physician), either dapagliflozin (10mg/day) or a matching placebo. Eligible subjects had an HbA1c level between 6.5 and 12.0% as well as a creatinine clearance of 60 ml or more per minute.

Primary efficacy outcomes were (a) MACE, defined as CV death, myocardial infarction or ischemic stroke and (b) a composite of cardiovascular death or hospitalization for heart failure. Secondary prespecified efficacy outcomes were (a) a renal composite (> 40% decrease in estimated glomerular filtration rate to < 60 ml/minute per 1.73 m2, new end-stage renal disease or death from renal or cardiovascular causes), and (b) death from any cause. The follow-up of patients during trial was every six months.

A total of 17 160 participants were included in the trial with 6 974 subjects (40.6%) with established atherosclerotic CV disease and 10 186 (59.4%), with multiple CV risk factors. They were followed for a median time of 4.2 years. As shown in Table 1, there were no significant differences in the baseline clinical and biological characteristics between the dapagliflozin and the placebo groups. Glucose-lowering and CV therapies were also comparable in the subjects receiving dapagliflozin or placebo. During the trial, treatment with dapagliflozin was associated with a weight loss of 1.8 kg and a reduction of systolic and diastolic blood pressure respectively of 2.7 and 0.7 mmHg vs. placebo. HbA1c decreased from 8.3 to 7.9% and from 8.3 to 8.1% in the dapagliflozin and placebo groups respectively. 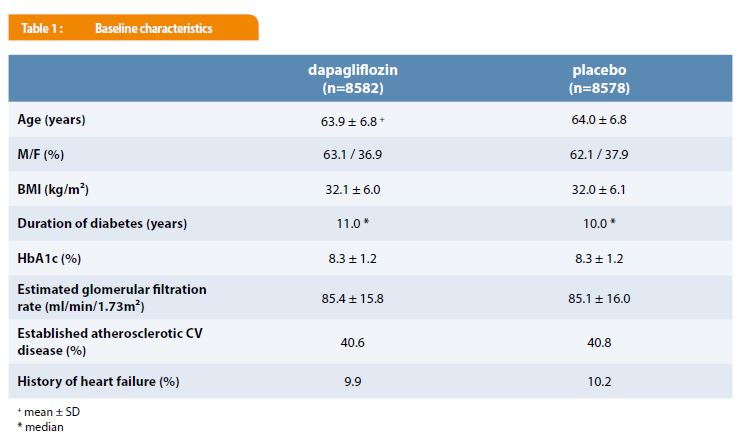 The primary CV outcomes results are summarized in Table 2. Thus, in a first statistical step, dapagliflozin met the prespecified criterion for non-inferiority for MACE vs. placebo in the primary safety outcome analysis (p < 0.001). In a second step, in terms of primary efficacy outcomes, it did not result in a significant lower rate of MACE vs. placebo (8.8 vs. 9.4%, p = 0.17) (NS) (Table 2). In contrast, dapagliflozin was associated with a significant reduction in the rate of CV death or hospitalization for heart failure (4.9 vs. 5.8%, p = 0.005), as shown in Table 2. The difference in the latter composite outcome was mainly the consequence of a lower rate of hospitalization for heart failure in the dapagliflozin group (HR = 0.73 [95% CI : 0.61-0.88]), while there was no significant difference in the rate of CV death (HR = 0.98% [CI: 0.82-1.17]). It is essential to mention that the efficiency of dapagliflozin was observed in both subgroups of individuals with established atherosclerotic CV disease and in those with “only” CV risk factors (Table 2). Interestingly, the hazard ratio for this primary efficacy outcome was slightly lower in patients with an eGFR < 60 vs. > 90 ml/min/1.73m2 (HR: 0.78 [CI: 0.55-1.09] vs.0.96 [CI 0.77-1.19], p = 0.37 for interaction). The rate of death from any cause was comparable in the two groups (6.2 vs. 6.6% in the dapagliflozin and placebo groups, respectively). A renal event occurred in 4.3% in the dapagliflozin group and in 5.6% in the placebo group (HR: 0.76; [0.67-0.87]). Fewer patients in the dapagliflozin group (34.1%) vs. the placebo (36.2%) reported a severe adverse event (p < 0.001). As in previous SGLT-2 inhibitors studies, genital infections were more frequent in subjects receiving dapagliflozin vs. placebo (0.9 vs. 0.1%, p <0.001). Diabetic ketoacidosis was observed only in 0.3% of the subjects treated with dapagliflozin. The rate of amputations and fractures was similar in the two groups. 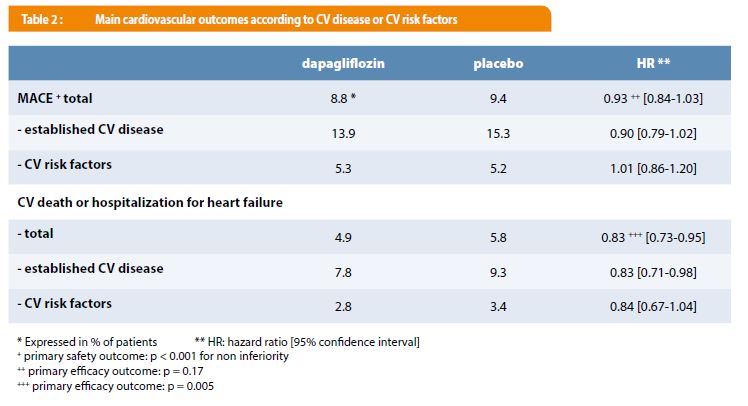 The present study did not find that dapagliflozin resulted in a lower rate of MACE or CV/overall deaths vs. placebo, a finding contrasting with data from previous trials, in particular EMPA-REG OUTCOME (10,11). This could be due to relevant differences in the clinical profiles of diabetic patients included in these studies. As already mentioned, in the DECLARE-TIMI 58, there was a high proportion of patients in primary CV prevention (vs. < 1% in EMPA-REG OUTCOME trial). Moreover, basal characteristics in terms of renal status were also somewhat different as shown in Table 3: the DECLARE-TIMI 58 study included only 7% of patients with an eGFR lower than 60 ml/min/1.73 m2 vs. 25% in the EMPA-REG OUTCOME (or 20% in CANVAS) (11,17).

EASD and ADA in 2018 indicate that, in type 2 diabetic patients with a past history of CV disease, heart failure or chronic nephropathy, SGLT-2 inhibitors and GLP-1 agonists are recommended in a dual therapy approach after metformin failure (6,7). In a very recent metanalysis, including more than 34 000 patients (60.21% with established atherosclerotic CV disease), Zelniker et al. demonstrated that SGLT-2 inhibitors had globally moderate benefits in MACE that were indeed confined to patients with a past history of atherosclerotic CV disease (HR: 0.89 [CI: 0.83-0.96], p =0.014), but major benefits in reducing hospitalization for heart failure (HR: 0.77 [CI 0.71-0.84], p < 0.0001) and progression of renal disease (HR: 0.55 [CI 0.48-0.64], p<0.01), irrespective of whether or not they had a macroangiopathy, chronic kidney disease or heart failure (18). In view of these data, Verma et al. even suggested that SGLT-2 inhibitors should be considered as first line therapy after metformin in most people with type 2 diabetes, regardless of an existing atherosclerotic CV disease or a history of heart failure (19).

As far as side effects of gliflozins are concerned, the rate of severe genital infections and diabetic ketoacidosis, even if higher, as expected, in the dapagliflozin group remained very low throughout the study in all the patients. It is also of interest to mention that the rate of amputation, fractures or volume depletion was comparable in the two groups of patients.

In conclusion, dapagliflozin administration resulted, in a broad population (primary and secondary prevention), in a significant lower rate of cardiovascular deaths and hospitalizations for heart failure vs. placebo, reflecting mainly a lower rate of hospitalizations for heart insufficiency. A reduction in terms of renal outcomes was also reported. Together, these observations are of main clinical relevance in the context of the high prevalence and severity of heart failure and nephropathy in type 2 diabetes. Clinicians should be aware of this new progress in the treatment of patients with type 2 diabetes with and without a medical history of macroangiopathy or heart failure.