A 36-year-old Caucasian woman was admitted to the emergency room of our hospital, complaining since several days of sore throat, cough, fever, headache, and rhinorrhea. She had been unsuccessfully treated with amoxicillin-clavulanate during the week preceding her admission. The medication was stopped owing to gastric intolerance. She also took acetaminophen up to 6 gr a day during 3 days. No improvement was noticed. Her past medical history was unremarkable, with an appendicectomy in childhood and a tubal ligation. She worked as a nurse in a childcare center. She was taking rupatadine chronically. She was not on oral contraception. She used to smoke five cigarettes a day, accounting for a 3 pack-year history.
On clinical examination, her blood pressure was 144/67 mmHg, her heart rate 98 bpm, her body temperature 38.3 °C, and her O2 saturation was 100 %. The clinical examination showed a cervical adenopathy, with no meningeal signs found. Neither liver nor spleen enlargements were present. A truncal skin rash, diagnosed a week before as Pityriasis rosea, was also present.
Serum testing revealed a mild elevation of aspartate aminotransferase (AST), alanine aminotransferase (ALT), and lactate dehydrogenase (LDH) levels (64 U/L, 88 U/L, and 1070 U/L, respectively). A leukocytosis was also noticed (total white blood cell count of 10910 mm3) with a mild lymphocytosis (4146/ mm3) as well as a thrombocytopenia (78.000/ microl). The C-reactive protein level was of 4 mg/l.
There was no alteration of the renal function. The abdomen ultrasound was strictly normal. Because of persistent headache a CT-SCAN of the brain and an electro-encephalogram were performed that were both normal.
Results of serology testing received three days after admission showed a Cytomegalovirus (CMV) seroconversion. Parvovirus B19 IgM were positive as well. Serologies for HAV, HBV, HCV, EBV, anti-Toxoplasma IgM, Rickettsiosis, Leptospirosis were negative. Antinuclear antibodies were detected at a titer of 1/320 while anti-mitochondria and anti-smooth muscle antibodies were not detected.
In the meantime, the platelet count decreased progressively from 78.000 mm3/µL on admission to 18.000/ mm3 and 28.000/mm3/µL on the fourth day of hospitalization using an anticoagulant EDTA and sodium citrate 0.109 mol/l respectively. At the meantime, a purpura appeared on the lower limbs (Figure 1). Polyvalent human immunoglobulins were administered at a dose of 1 g/kg once a day for two days. After two days, the platelet count increased to 60.000/mm3. 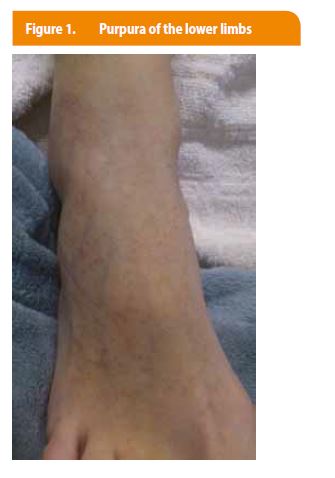 Meanwhile, a repeated abdomen ultrasound was performed just before the first administration of polyclonal immunoglobulins, revealing an extensive thrombosis of the two branches of the portal vein (Figure 2), confirmed by a CT-SCAN without any extrinsic compression. A thrombophilia screening including assays for protein C and S, factor V Leiden and G20210A prothrombin mutation, lupus anticoagulant, anti-cardiolipin antibodies was negative and the patient was given enoxaparine at a dose of 1 mg/kg twice a day, with a rapid initiation of oral anticoagulation with acenocumarol initially 3 mg/day aiming for an INR between 2 and 3 for six months. During the hospitalization the rash became milder and finally disappeared. 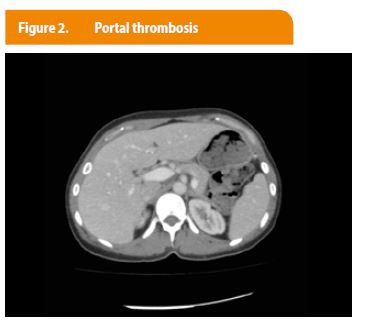 When the patient was discharged, she was still suffering from milder headaches well controlled by Ibuprofen. Aspartate aminotransferase and Alanine Aminotransferase levels were normal.
At the first follow-up visit, one month later, her platelet count was normal, headaches had totally disappeared but she was still complaining of fatigue and was stressed because of the difficulty to keep her INR in the therapeutic range. She had lost 3 kgs.
An abdominal computed tomography repeated two months after discharge showed a complete recanalization of the portal vein (Figure 3), Oral anticoagulation was discontinued. 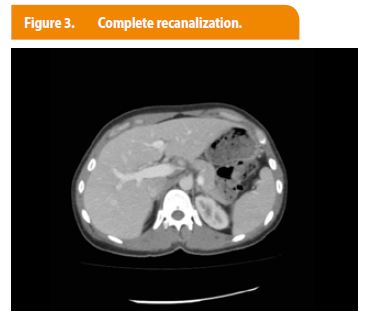 Five months later, a Polymerase Chain Reaction was performed on the preserved frozen serum of the patient, detecting 391 copies of CMV-DNA/ml, which is a relatively low titer (normal < 1250 copies/ml). The serum had been frozen several hours after it had been drawn (>12 hours) probably accounting for the decrease in viral DNA detection.

According to Squizzato’s metanalysis (1) published in 2005, 11 cases of CMV related Portal Vein Thrombosis have been reported in the literature. In all cases a mild elevation of transaminases was observed, with AST ranging from 51 to 450 IU/l and ALT from 51 to 240 IU/l. A complete resolution after treatment occurred in 8 cases, while partial recanalization was shown in one case (2) and a portal cavernoma developed in two patients (3). Among the latter, two patients were affected by a coagulopathy (3) while another was on oral oestro-progestative contraception. Only three patients did not complain of abdominal pain (4) as in our report.
There is some evidence that CMV infection induces a procoagulant state in vitro and in vivo. In vivo, a decreased clotting time in different clotting assays was observed after CMV infection (5). Several mechanisms have been proposed such as CMV induced over-expression of CD40 (6) and of the endothelial leukocyte adhesion molecule-1 (ELAM-1) (7). Moreover purified CMV strain AD169 can express phosphatidylserine (PS)- like procoagulant activity (8) as well as facilitate the conversion of factor X/Xa in the presence of factor VII/VIIa and calcium (9).
An antiphospholipid syndrome must be ruled out, because of the association between these two entities, as shown in a case reported in Squizzato’s metanalysis and elsewhere in the literature (10). Indeed the mechanism of procoagulability in CMV infection can be sought as well in the fact that human cytomegalovirus (CMV) can play a role in the generation of antiphospholipid antibodies sharing functional properties similar to those of aPL (11). These antibodies can potentially have lupus anticoagulant activity and favor leukocytes adhesion to endothelial cells, thus enhancing thrombus formation (11).

CMV related thrombocytopenia is a well-known complication of CMV infection as well as of other viral infections. It has been described as a cause of myelodysplasia and autoimmune abnormalities. However, its mechanism is not well understood. The role of EBV and CMV has recently been demonstrated by Wu Z. and colleagues (12) but currently it is impossible to state whether thrombocytopenia was directly caused by CMV infection or immunomediated. The temporal relationship between the onset of symptoms and thrombocytopenia would rather suggest a cytopathic effect whereas the dramatic response to immunoglobulins is more consistent with an immunomediated mechanism although the two mechanisms could be involved. CMV has been implicated in some cases of Thrombotic Thrombocytopenic Purpura and hemolytic anemia as well. In a case review published by Eisenberg and Kaplan (13) corticosteroids were preferred whereas in another case (14). Ganciclovir was administered and both treatments were effective. Because of the infectious condition, we decided to administer polyvalent human immunoglobulins.

Portal Vein Thrombosis can be a rare but dangerous complication of CMV infection (15). Several patterns of thrombogenicity have been described but the underlying mechanisms are not fully understood. We suppose that the rarity of such a condition could in part be explained by underdiagnosis. The role of ultrasound as a screening test in patients presenting with CMV infection and elevation of liver enzymes should be emphasized.