The first description of this lesion was originally made by Porral (1). Since, there have been only some individual case reports and rare case series for a total of approximately 40 cases (2). The mechanism seems almost always related to a major trauma with force on the lateral part of the shoulder or a severe pressure of the shoulder with a torsion of the trunk. The literature reports a wide range of options from conservative treatment, to aggressive surgical stabilization and even total clavicle excision for neglected dislocation (3).There is no consensus yet on the best method of treatment due to the rarity of this injury and the lack of large series but usually young and active people tend to be treated by surgical stabilization of the AC joint with the SC joint dislocation being treated non-operatively whereas low demand patients are managed nonsurgically.

A 56-year-old right handed baker presented to our hospital 3 weeks following a high velocity car accident in his native country Togo, Africa. The initial mechanism of injury was unknown as the patient has no memories of the accident. Fortunately, he had no life threatening lesion and suffered mainly from an anterior dislocation of his right sterno-clavicular (SC) joint associated with right acromio-clavicular (AC) dislocation and right anterior rib cage fractures (1st to 5th ribs). He was treated conservatively with painkillers only and no immobilization of the right shoulder was given to the patient.

At the first evaluation, the only complaint was swelling and tenderness over the medial end of the clavicle with mild discomfort while moving. The lateral end of clavicle was also painful, obviously ascended but with no gross instability. Range of active motion of the right shoulder was limited to 80° in abduction and forward flexion and to 40° in external rotation. The internal rotation was also limited. Initial functional shoulder score was 21 according to Constant-Murley shoulder outcome score (4). 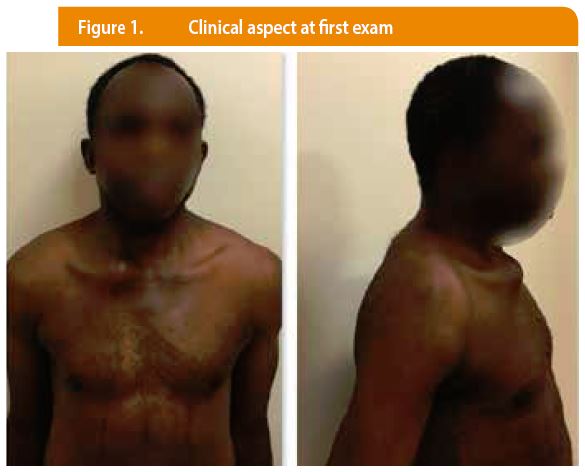 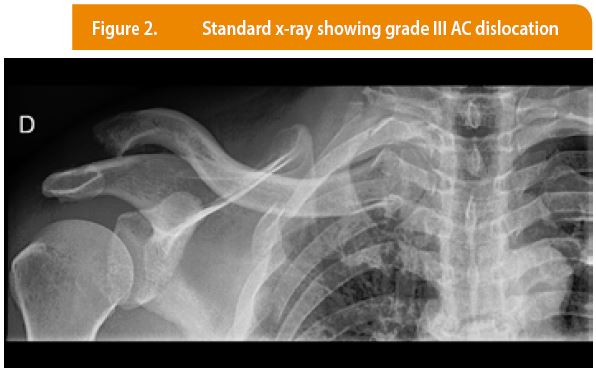 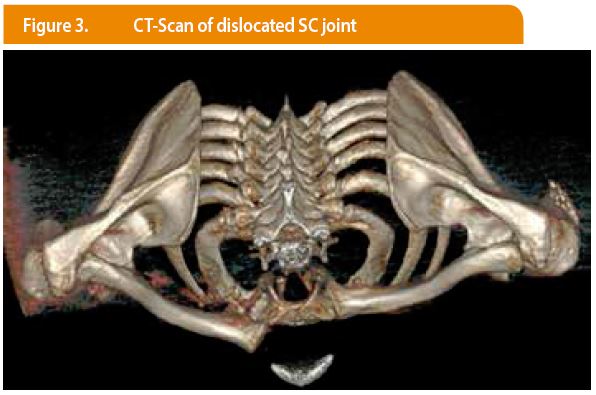 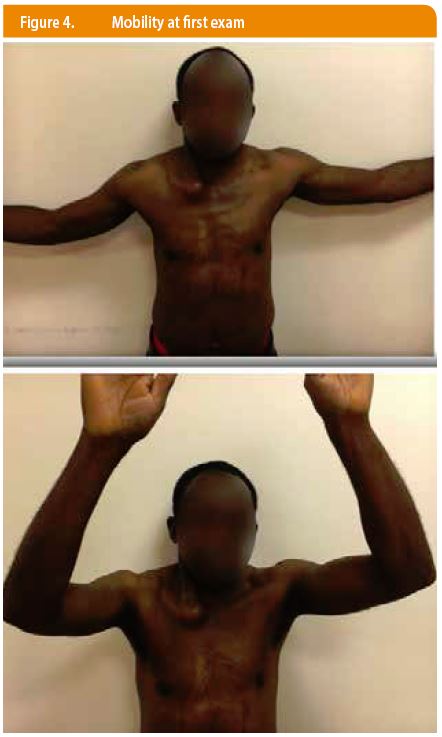 Since the patient’s mobility was gradually improving, due the limited pain, and the signs of callus formation over the SC joint, it was decided to treat the patient conservatively with painkillers and right upper limb rest in a sling for few weeks.

At 8 weeks follow up, the patient had regained nearly full range of motion of his right shoulder with 170° in forward flexion, 160° in abduction, 60° in external rotation and full internal rotation. No motor or neurovascular deficit was noted. There was no resulting tenderness over AC or SC joint. Constant score was 68. The only complaint was the aesthetic deformity of the SC joint.

At final evaluation (12 months), the patient has fully recovered with full range of motion of his right upper limb, no pain with weight-lifting, even during his manual work of baker (Constant score 96). The aesthetic deformity of the SC joint stays stable but was better accepted. 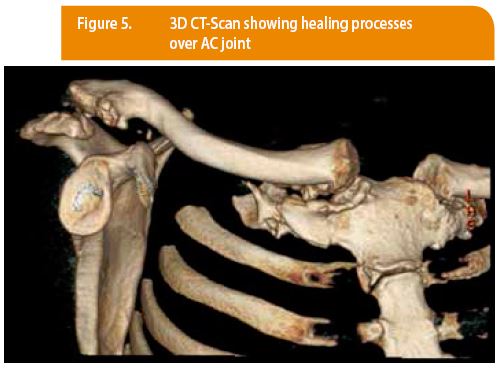 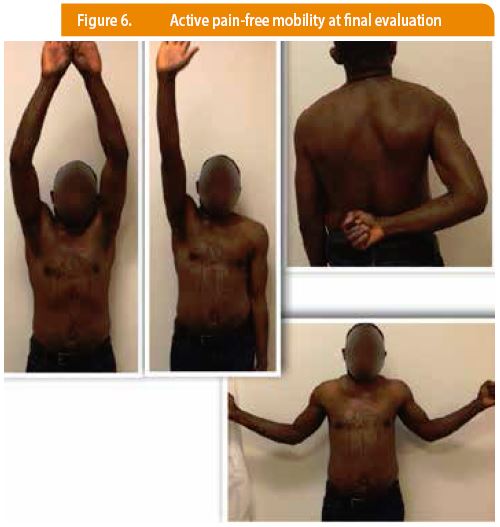 Bipolar clavicle dislocation consists in simultaneous disruption of both medial and lateral end of clavicle. As in literature, our case is related to high energy trauma (car accident), only one exception has been reported after minor trauma in an elderly patient by Jain (5). Due to the amount of energy needed to cause disruption of strong acromio-clavicular and sterno-clavicular joints, this entity consists most often in the association of dislocation of one end and fracture of the other end of clavicula (or fracture of both end). Our case is remarkable by the association of dislocation of both end of clavicula without fracture. To our knowledge, this entity has seldom been reported with less than fifty cases since 1831. 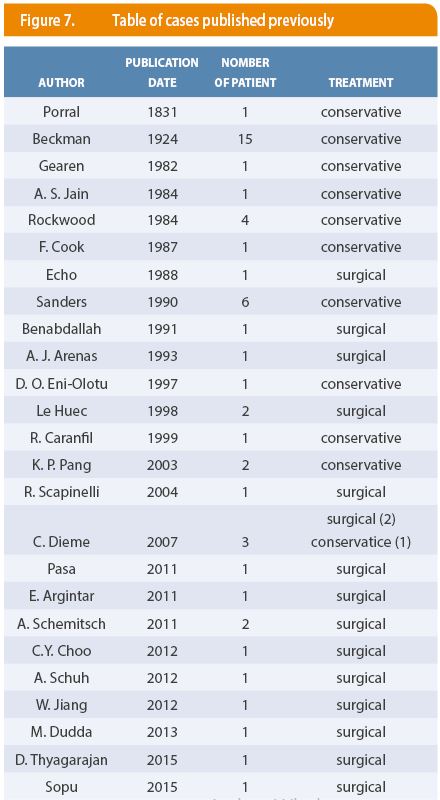 The mechanism of injury in pure bipolar dislocation is complex, resulting from a violent blow to the lateral aspect of the shoulder or a heavy compression with an associated torsion of the trunk (6,7,8) causing the clavicle to acts as a lever, anchored at the conoid and trapezoid corcoclavicular (CC) ligaments.The sternoclavicular joint first subluxates anteriorly, this is followed by posterior subluxation of the AC joint or fracture of the lateral end of clavicle, with the CC ligament acting as a fulcrum for the clavicle (9).

Anterior displacement of medial end of clavicula is usually found since the force needed to dislocate the SCJ posteriorly is 50% greater than the force required for anterior dislocation (10,11).

The diagnosis of this lesion can be difficult because of the concomitance of other lesions in high energy trauma and since a lesion of medial end of clavicle can go unnoticed on a classical X ray, the diagnosis must include CT scan analysis to correctly visualize the 2 extremities of the clavicle (12,13).

Since there is no consensus or clear evidence favoring surgery, it is suggested to use the age, the functional requirements, the presence or absence of neurovascular deficit to evaluate surgical indication. But non-operative treatment with late AC reconstruction if symptomatic does not appear to worsen the results. The surgical techniques to be used is also questionable as stabilization of the SCJ is a relatively rare and risky procedure due to the posterior anatomical relationship of the sternoclavicular joint (18) and is advocated only for young and active patient requiring a good overhead strength. It is also unclear which type of stabilization device should be used and whether both AC and sterno-clavicular joint should be reduced and fixed or only the sterno-clavicular joint (9,17,19,20,21).

A series by Sanders et al. reported six patients with bipolar injury, all treated non-operatively, interestingly, four of the six required surgical stabilization for relentless pain, but the AC was the only affected joint, the SCJ remains always pain free (22). Most of persistent symptoms following conservatively treated bipolar dislocation of clavicula are managed by stabilization of the acromioclavicular lesion as if it was an isolated injury and the sternoclavicular injury is usually left untouched even though it may be unstable, because of the risks of operative complications.

Despite literature suggesting surgical stabilization for active patient, we observed excellent functional result with conservative treatment, even in manual worker. Since the rarity of this lesion, and the risks associated with surgical treatment, we think that surgery must be reserved to selected cases and experienced surgeons, knowing that nonoperative management can offer satisfying functional recovery. The long-term results are still doubtful as the evaluation of the different surgical options for treatment, and need to be clarified by further retrospective national database studies.