Nearly one third of the world population is infected by Mycobacterium Tuberculosis. Tuberculosis remains a public health concern especially in the developing world. It tends to affect people from 15 to 50 years old.

Genito-urinary tuberculosis (GUTB) is a severe form of EPTB, reported to account for 20 to 73% of all EPTB (1,2). The infecting Mycobacterium tuberculosis bacilli reach the kidney through, hematogenous spread from the lungs and then spread down the ureter, bladder and/or prostate. The most common genital sites are the epididymis, prostate, and seminal vesicles; the testes being the least commonly infected (2). Tuberculous epididymitis is a rare condition, difficult to diagnose by its insidious nature often mimicking chronic orchido-epididymitis. The diagnosis is confirmed by culture, Ziehl-Neelson staining and/or histopathology.

We report a case of a patient, with no history of pulmonary TB, who presented with right scrotal pain as an acute presentation mimicking an acute bacterial epididymo-orchitis. As the anti-bacterial therapy didn’t succeed, we completed the work-up as for a testicular tumor. CT showed retro-peritoneal lymph nodes. The diagnosis was made by laparoscopic lymphadenectomy.

During the urology consultation, the patient indicated that the pain was present for 3 weeks despite antibiotics (Quinolones) treatment by his GP. There were no lower urinary tract (LUTS) associated symptoms. The pain irradiated toward the right inguinal region. No fever, no weight loss. He had no history of STD (sexually transmitted disease).

On clinical examination, the scrotal skin was reddish; the right scrotum was swollen and tender. The right testis was bigger in volume, painful, multiples small nodules were present. On the left side the epididymis was sensible but with no palpated nodules.
Blood tests including hemoglobin, white blood cells count, liver tests, ions and C-reactive Protein (CRP) were normal. The prostate specific antigen (PSA) was normal. Urinary analysis showed no red or white blood cells. 4 cultures for bacteria and Mycobacteria were all negative. Semen culture was also negative.
Scrotal ultrasound showed a slightly inflamed right epididymis, non-suspect hypoechoic lesions in both testes He was treated with antibiotics (Betalactames) plus NSAID for epididymo-orchitis (7 days).

Follow-up consultation showed no improvement of symptoms with a persistent enlarged and tender right scrotum. On clinical examination there were three firm nodules in the right testis and one in the left epididymis. A second scrotal ultrasound showed an enlargement of the hypoechoic lesions in the testicles with a hypervascular peripheral zone. Urinary tract ultrasound was normal. The tumor markers Alpha-fetoprotein, beta-human chorionic gonadotropin and LDH were normal.
An internal medicine review for Tuberculosis was negative (chest X-ray, QuantiFeron-TB interferon-gamma). The PCR for Mycobacterium Tuberculosis remained negative . The Ct scan showed progressive retroperitoneal lymph nodes with a 20mm common iliac lymph node with a necrotic center (Figure 1). There were no signs of TB on the urinary tract. 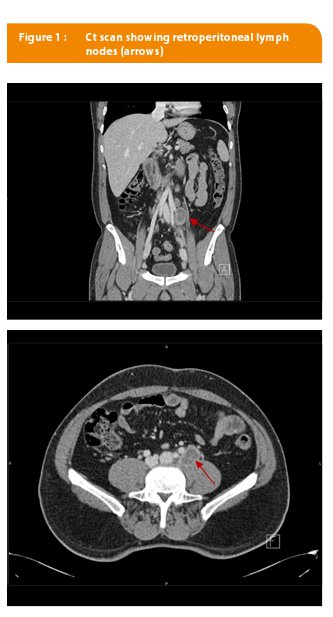 With the persistent clinical symptoms and no clear diagnosis, a surgical exploration was warranted. We performed a right inguinal biopsy of the testicular parenchyma and a distal epididymectomy. The pathology report showed no tumor, only signs of granulomatous inflammation (related by the pathology report to a ruptured spermatocele).
With regard to the lymph node and no certain diagnosis, a fine needle aspiration was performed. The pathology report showed pattern of granulomatosis compatible with TB but culture could not be performed because of insufficient material.
During the work-up the patient started to complain of weight loss, night sweats and intermittent fever (up to 39°). With the evidence of a probable TB but no positive culture and a negative QuantiFeron-TB test, a lymph node macro-biopsy seemed mandatory before starting any treatment. A laparoscopic intervention was done, the abdominal cavity exploration showed: no ascites, no nodules on the bowels neither on the peritoneum. The left common iliac lymph node was dissected. The samples were sent for culture and pathology.
Macroscopic aspect (Figure 2) showed whitish necrotic center surrounded by nodal tissue suggestive of TB. 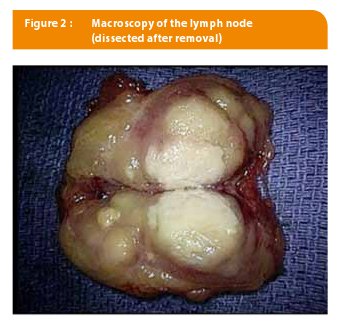 Ziehl-Neelsen staining showed alcohol-acid resistant bacteria (Figure 3). The cultures were rapidly (2 weeks) positive for M. tuberculosis. On antibiogram the M. Tuberculosis strain was sensitive. A medical therapy was started. The treatment lasted for 12 months in total; 6 months of quadritherapy (Isoniazide, Myambutol, Rifampicine and Tebrazid) and 6 months of bitherapy (Isoniazide + Rifampicine. On follow-up the patient no longer had fever, nocturnal sweats, and had regained weight. Sedimentation rate became normal (from 110 mm/h to 6 mm/h). CT showed a diminution of the enlarged nodes, from 25 mm for the largest to 13 mm. CRP became normal also at the end of treatment. 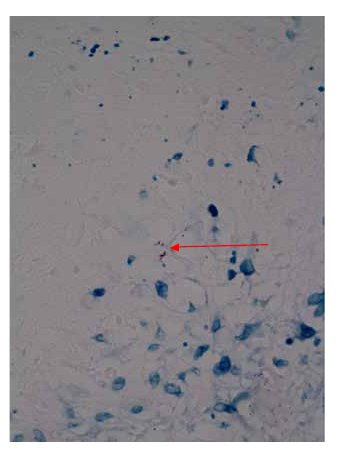 Tuberculosis remains a world public health concern even with drug therapy available. Its remains the most common cause of mortality from infectious disease (1). Genito-urinary tuberculosis (GUTB) is a severe form of extra pulmonary TB (EPTB) and accounts for 20-73% of cases (2). The most commonly affected organs being the epididymis (22%) and the testis followed by the bladder, the ureter, the prostate and the penis.
TB epididymitis may be the first and only manifestation of GUTB in cases in which upper urinary tract studies are normal and urine cultures are negative (3). Clinical features are flexible and variable and GUTB mimics numerous other diseases which results in often delayed diagnosis (2,4).
The spread of tuberculosis to the epididymis occurs hematogenously, lymphatic or through a retrocanalicular pathway (2,5). The epididymis is affected in 10-55% of men with GUTB and can be the only clinical manifestation of the TB disease. In case of the infection reaches the scrotal wall a skin fistula may form. TB epididymitis reaches predominantly the caudal part of the epididymis due to its vascularity. Rarely TB epididymitis occurs from a venereal transmission.
Risks factors for GUTB include sexually active young men, immunocompromised patients, AIDS, cirrhosis, peritoneal dialysis, chronic renal failure, diabetes mellitus, use of systemic corticosteroids, adverse infectious events associated with the instillation therapy with Bacille Calmette-Guerin (BCG) used in non-muscle invasive bladder cancer (1,3).
Clinically, tuberculous epididymitis can be a difficult diagnosis because of the variability of symptoms. Hematuria, lower urinary tract symptoms, scrotal swelling are the most common present features (6,7,8). Irritative voiding symptoms seen in acute bacterial epididymitis can be absent as was in our patient.
On clinical examination, there can be lumps, painless scrotal swelling, epididymis hardening/beading or scrotal fistula.
This patient had no history of TB. The evaluation: Chest-Xray, Quanti-FERON-TB was negative. There were no radiologic signs of TB on the urinary tract. Histopathology only showed granuloma inflammation. Fine needle specimen didn’t yield enough materiel for culture. The presence of retroperitoneal lymph posed the indication for a surgical approach for a definitive diagnosis.
The diagnosis of GUTB can be difficult as the symptoms are non-specific. Urinalysis and culture are often negative. Persisting “sterile pyuria” on urinalysis should raise suspicion. Three to five early morning samples should be cultured with a Ziehl-Neelsen acid-fast staining technique. Its specificity is of 96.7% and sensitivity of 42-51% (1,3). Results can take up to 6 weeks to be obtained.
Today Polymerase Chain Reaction (PCR) has replaced urinalysis, as results are available in 48hours with a sensitivity of 95% and specificity of 85.7% (1).
The provocation test with intradermal tuberculin injection has value only if positive. False positive results can be obtained if there is prior BCG vaccination or BCG bladder instillation in superficial bladder cancer (3).
Fine needle aspiration (FNAC) has been used although most authors refrain from it, as the risk of an underlying tumor is present. QuantiFeron-TB is an IFN releasing test, it measures the IFN released by sensitized white blood cells after whole blood is incubated with TB antigens. It’s an aid for diagnosis of latent tuberculosis infection (LTBI) and tuberculosis infection. Its negative predictive value (NPV) is of 99.8%.
Radiologically, tuberculous epididymitis is difficult to distinguish from bacterial epididymo-orchitis. The ultrasound (US) findings include an enlarged epididymis predominantly the tail portion and a marked heterogeneity. If there is associated testicular involvement, the US shows a diffusely enlarged testis or ill-defined focal intra-testicular hypoechoic areas or irregular margins between the testis and epididymis. On computed tomography the lesion appears hyperenhanced with the use of contrast medium, necrotic areas and peripheral calcifications.
The particularities of this case are: the negative culture of the urine samples, epididymectomy and internal medicine work-up. The corner-stone for diagnosis being by laparoscopic abdominal nodal sampling.

Few articles exist on TB epididymitis with retroperitoneal lymph nodes involvement. T Oben and al (9), reported a case of TB epididymitis with retroperitoneal and mediastinal lymph nodes involvement managed with medical therapy. De Backer and al (10) described a similar case. Blumental and al (11) recommended drainage of large collections followed by antiturbeculous therapy.
Abdominal TB is uncommon in the western world although its frequency is increasing with immigration, multi-resistant TB and AIDS. Several authors have reported on TB diagnosed by laparotomy or laparoscopy (12,13).
Studies showed the difficulty of diagnosis including non-specific features, unhelpful laboratory tests and non-specific findings on ultrasound or CT scan. Surgery unfortunately tend to be used as a last resort, and has shown its specificity as a diagnostic tool for abdominal TB (14).
The treatment of GUTB consist of a short-course antituberculous regimen which is based on an initial 2-month intensive phase of treatment with three or four drugs daily Rifampicin, Isoniazid, Pyrazinamide, and Ethambutol (or Streptomycin), followed by a 4-month continuation phase with only two drugs mostly Rifampicin and Isoniazid (15).
About 55% (3) of patients with GUTB will require surgery. This is due to the fact that the diagnosis is often late. There is consensus for surgery in cases of absence of evolution within 2 months of medical therapy, severe urinary tract infection with sepsis. In case of progressive disease (as in our case) with unspecific diagnostic, surgery permitted the start of the appropriate treatment.

The insidious progression, paucity or non-specificity of symptoms, render the diagnosis of GUTB often difficult and late.

Therefore, urologists should always consider the diagnosis of genitourinary TB in a patient presenting with vague, long-standing urinary symptoms for which there is no obvious cause.

This case is of particular interest as the genital tuberculosis had extended into the retroperitoneal lymph nodes. The diagnosis was done by laparoscopic lymph node dissection.

- Diagnosis is made by positive culture or histology analysis of biopsy specimen, PCR is a rapid method

- Surgery is considered for cases when symptoms have failed to respond to medical treatment or non-resolving abscesses. Sometimes it’s the diagnostic tool.

Conflict of interest: none